OSR discord user Corgifan2 later clarified that this was due to the GM's misunderstanding of a rule and they should only have made 21 attacks
so, someone posted this in the OSR discord and i was incensed to find the mass effect d20hack i remember having written, because there's no way it could be as bad as apparently, the one that was officially released
well, i did find it
it is from 2012
it is real bad but it actually might be better than the system described above
so i am thus compelled to post it, in an effort to erase any respect and/or community goodwill i might have accrued thus far
it lives in several google docs (because that is how i did things at the time how i still do things, tbh) and it is written in the extremely tedious format of a child (i guess a 20 year old?) trying to emulate the extremely specific rules text of D&D 3.5e and also Magic the Gathering (because that is how i did things at the time. i think i have actually stopped doing this, mostly,. hopefully, thankfully)
i think the word "may" appears 33,000 times in total across t hese documents

it is probably runnable, it looks fairly complete for what it is
i do not recommend anyone do this, but who knows
if you have played the "official" mass effect d20 game please let me know if it's better or worse, lmao

"Core Rules"
Species (EDIT: forgot these)
Classes
Powers (i think these go with the classes)
Equipment
Skills and Feats
Monster Manual
Misc notes/TODO
Posted by vayra at 6:40 PM No comments:

In an effort to codify more of the Mountain at the End of the World's setting and hopefully end up with something that can actually be played, I drew a rough point-map (forgive my preschool-grade block printing)... clicc for big
...and as a result, I was able to start working on the dungeon levels. That meant trying to write a one-page dungeon, realizing I was broadly incapable and blowing it up to 3 pages, settling on a layout, fumbling around trying to place stuff in various programs before deciding I'd just do it in photoshop, and, well, finally producing... 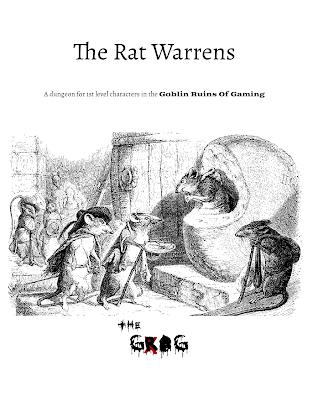 clicc rat for PDF (4 pages including cover)
The Rat Warrens. This is the "western" rat warrens on the map, under the New City, and is an "introductory" level to the megadungeon that is the Mountain. I'm not going to pretend it's another Tomb of the Serpent Kings, but I think it does an okay job of teaching some basic dungeoncrawling lessons - carry lots of light, talk to everything, combat has consequences, it's okay to run from fights, et cetera.
It's meant to be played with the GROG and The Mountain at the End of the World Player's Handbook, but (like any OSR-y D&D-y thing) it can be adjusted with fairly little effort to pretty much any other system that you're familiar with. Of note I guess is that it doesn't include morale stats (I just use a Charisma roll) so maybe have morale be 7 +/- CHA mod (which gives ratmen 5 morale and feels appropriate) or assign it by fiat or something.
Adjusting it for a different setting is also pretty simple:
hobgoblins = humans i guess, maybe elves or dwarves or what have you
ratmen, bat men = goblins, kobolds, or just leave them as-is
elves (rooms 10-15 are ancient elf tombs but the assumption is none of the PCs know what the fuck is an elf, in case that wasn't clear) = ancient evil snake people or some other sinister long-dead empire

This dungeon is free (of course), but if anyone ends up playing it, I would certainly appreciate some feedback--or if you really enjoy it, a couple bucks thrown in my ko-fi.

I'm pretty happy with & proud of the Rat Warrens, and I hope to produce the rest of the Mountain levels in more or less this format over time. Let me know what you think!
Posted by vayra at 9:52 PM 3 comments:

Somewhere towards the southern edge of the tetrahedral world, an expedition gathers...

This is for deus ex parabola's edge-climb campaign thingy, not GROG or the Mountain.

The original flavor GIANT SPIDER AAAAAA is cool, but it's a little weird for actual play probably. This started out as an attempt to "balance" it, but giant spiders are... resistant to balancing. They just have Too Many Legs.

You are a giant spider, about the size of a large dog, bigger than a human if you include all your legs but rather smaller than one if you don't. You can't wear armor or clothing or use tools unless they were designed for giant spiders, can't talk (but you can dance expressively to get simple points across), and don't have an inventory besides your spider backpack and spider harness.
Skills: 1. Ballooning 2. Architecture 3. Craft Brewing
Starting Equipment: Spider backpack, spider harness, between 2 and 10 eyes, one other piece of spider gear (see below).
A: Chelicerae, Spinneret, Ambush Predator, Too Many Legs
B: +2 Adaptations
C: +2 Adaptations
D: +1 Adaptation, Choose 1 Adaptation
A: Chelicerae
You've got fucking terrifying spider fangs. They have little claws on the end that you can use to pick stuff up and perform delicate manipulation, but not enough range of motion to use tools. They are a medium weapon that deal 1d8 damage. When you reduce something to 0 or lower HP with your chelicerae you can decide whether it's dead or just paralyzed for a while. If it matters, your damage is dealt mostly through venom and doesn't really fuck up bodies visibly unless you look at their insides.
A: Spinneret
You can produce shitty little cobwebs. You can use it like a sort of glue or binding, but not like a rope... yet.
A: Ambush Predator
Instead of sleeping, you lower your metabolic rate to a state that approximates sleep but during which you are still aware of your surroundings and from which you can wake instantly. While in this state, you don't require food. If you do this for eight-ish hours, you require only half rations that day.
A: Too Many Legs
You've got eight of them. You can climb (without rolling) anything a normal-size spider could, at your normal movement speed. You can climb (with a roll) anything else like a monkey. You can't climb icy things unless you've got little spider boots or spider gloves or your feet will get cold and you'll die. You can identify which category climbable things fall under by looking at them. IF YOU THINK ABOUT IT THOSE LONG HAIRY LEGS ARE A LITTLE SEXY ACTUALLY 😳

Every time you gain an Adaptation, roll on this table. Each entry will specify if it stacks or if you need to reroll if you already have it or whatever.