For this story to make sense, I'll have to begin at the beginning.

Actually, scratch that, it'll make less sense if I do. I'm going to do it anyway, of course. Bear with me here:
In the beginning, a bunch of people in Victorian Britain wrote terrible novels...
No, that's too early. Let me start over.

In the beginning, which was about five years ago, Joseph Manola posted a list of Victorian "penny dreadful" novel titles.
Yesterday, I think, OSR discord user deus ex parabola took that list and transformed it into potential class names.
Over the course of that day, OSR discord user deus ex parabola, Phlox, Lynn, Gorinch, Xenophon of Athens, Purplecthulu, Oblidisideryptch, and I turned them into (rough) class templates.
Then deus ex parabola posted them on his blog.
...And then I turned it into a random generator that mashes them all together.

It produces things like this.
It's surprisingly coherent sometimes. Maybe about a third of the time.

I am not sorry for what I have done and I hope it brings anyone who reads this joy and pain in equal measure. Post your favorite things it's come up with!
Posted by vayra at 12:53 AM 1 comment:

GLOG for Gretchlings: Or, Notes Towards a More Diverse Tabletop Roleplaying Community

This post is intended to be a central resource that explains the GLOG, extolls its virtues, and most importantly: Showcases how easily you can produce your own GLOGhack; participate in the immense, active, and ever-growing community; claim a little piece of the TTRPG world for your own; and stop system-hopping between corporate-published games that don't meet all of your needs.

What is the GLOG?

The GLOG (short for Goblin Laws of Gaming) originated with an innovative yet incomplete ruleset posted by Arnold K. over at goblinpunch, but it has since evolved far beyond that. It's less a single system and more of a philosophy, one that emphasizes the agency of individual game runners in making the system their own.
To date, the best published summary of the GLOG (as community, not as specific system) might be this post on DIY & Dragons from early 2019:

There's a definite do-it-yourself / make-it-your-own sensibility across these blogs. One person will write a new class, and a half-dozen people will write supporting material for it or incorporate it directly into their setting, and a half-dozen more will write modified versions of the original to better suit their own sensibilities. Nothing is sacred, nothing is off-limits, everything can be improved, or at least customized, including the rules themselves, which is why so many GLOGgers have their own houserules documents. 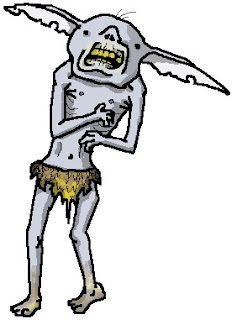 This is a gretchling, the mascot of the GLOGosphere. By reading this, you are becoming one, also known as a GLOGblin.
The best summary of the "original GLOG" might be this post by Lexi over at A Blasted, Cratered Land. Insofar as the GLOG has a set of standards or conventions that unify its multitudinous children, they might be these:
However, they are not laws. I'm sure I can name at least one GLOGhack that omits each standard.
Arnold's ruleset inspired - and continues to inspire - people in a vast, diverse, and decentralized community to create their own hacks, largely because:
That last is a quote from Skerples, himself a noted GLOGblin, and I think it explains a lot of the GLOG's appeal. The original GLOG is such a mess that it really motivates people to make it their own. 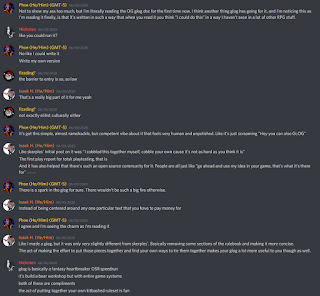 A dialogue on the nature of GLOG. A diaGLOGue.
You look at it, in its fragmented state, and realize that it has been used to run successful games, and you think, "Hey, I could write this." And then you do, and the GLOGlist grows by one.
A GLOGhack doesn't have to include much, or indeed any of the original GLOG. To quote Arnold K.:

I'm gonna print this out and frame it.
For further reading on the GLOG itself, one might consult this duo of Skerples' posts:

This is the core and most important reason. Even if you don't care about the politics of Wizards of the Coast, having your own game means freedom.
If the first draft of your rules isn't perfect or you find that some mechanic you're using doesn't work great at your table, that's fine. Playing is more important than perfection, and since it's your game you're empowered to add in new things, swap out other parts, remove stuff that doesn't fit, and there's no twitter account for your players to point to and say, "You're not right, Jeremy Crawford is."
Using GLOG as a base for your work doesn't mean you're beholden to the will of Arnold K, Skerples, myself, or anyone else any more than writing a book means you're beholden to the will of Johannes Gutenberg. The GLOG is decentralized and open-source: It explicitly exists to be remixed, torn apart, mashed with other things, and put back together. It's how the GLOG works.

Easy: By starting with a GLOG, most of the work is already done for you. Your GLOGhack may begin as just a copy of Many Rats on Sticks and a google doc of house rules like "ignore the page of rules for feudal estates, we're doing high fantasy", but it's still yours.
Fun: Once you take that first terrifying leap of faith and start writing your own hack, I can guarantee you'll find joy in it. But beyond that (and especially coming from 5e), you might discover a certain fun in the "OSR" style of play many GLOGhacks are built for. Arnold K wrote a short post about it here, and Ben Laurence of Mazirian's Garden wrote three posts on the strengths of the genre here, here, and here.
But even if you don't find that style of play compelling...

3) You can focus on the game and genre you want to run.

The benefit of having your own hack is that it can be a living document: You don't have to wait for a new edition or errata to fix something, and rather than waiting for a sourcebook to release for an alternate genre or switching systems entirely, you can easily adjust your system to them.
You can make character creation as long or as short as you want, character death as relevant or irrelevant as you want, combat as tactical or as abstracted as you want.
You can write the emotional or political themes you want in your campaign right into the rules - your game can be explicitly anti-racist, explicitly socialist, explicitly queer, explicitly about the talking mice from Redwall, all in a way that's backed up directly by the mechanics.
For example, say you want to run a campaign about the golden age of piracy, swashbuckling adventure on the high seas: Limit your classes to those that might be found aboard a ship, write some rules for firearms, cannon, sailing, and ship combat.
Say you want more tactical combat: Add Attacks of Opportunity and an explicit action economy back in, and a complicated system of weapon tags.
Say you want a game as much about managing stress and the relationships between party members as it is about dungeon crawling: How about mental and metaphysical inventory systems?
In fact, as the links above illustrate, there might already be a GLOGhack that does something close to what you're looking for that you can steal from.

How do I start?

First, open a text file, maybe a Word document. Personally, I like Google Docs.
Go through a copy of the GLOG. I recommend the final version of Skerples' GLOGhack, perhaps the closest thing to a canonical, orthodox GLOG compiled in one document - but there's an index linked at the end of this post if you want to look for one that better suits your needs as a starting point.
Make some notes on stuff you like and stuff you don't. Maybe add some notes about things you like and want to include that don't appear in the rules you're reading. If you think of some, write rules to include those things.
Some other GLOGblins have taken up the banner and written essays on how they started to make their GLOGhacks. These may help:
Take breaks! Go for a walk or make yourself a meal. This is your game, it is here for you, and it will be there for you when you get back. There's no release schedule to keep up with, no ruling arguments to keep abreast of. It's yours.

Get some friends together and run a game. Keep your notes open - make more, on what worked and what didn't, what you might want to change, and any rulings you make on the fly.
Read some more GLOGhacks. Start a blog. Post about your rules.
Start formatting your house rules document into its own thing, so you have just one file to print out or send to your players. Keep playing games and making notes.
Come by the GLOG channel on Chris McDowall's OSR discord and ask for help whenever or wherever you get stuck.

An incomplete index of GLOGhacks, and a link to the sheet with all of them
On GLOG
On Game Design

Why did you write this?

There have been... Several posts lately-and not-so-lately across the internet which provide a fairly damning account of the Wizards of the Coasts' actions as relate to diversity, inclusion, and our favorite tabletop roleplaying genre (not system, no, because Wizards can never own the idea of "tabletop fantasy roleplaying").
Some of it is about orcs and how they've become a symbol for racism in fantasy:
A lot of it is about WotC's conduct as a company:

Wizards, no sense of right and wrong
This post isn't about that, but it is useful background information. Taken together, this has caused people to consider switching their tabletop rolegameplay game to other systems so as to distance themselves from Wizards of the Coast. I'm sure plenty of people will switch to Pathfinder, but while Paizo may be "a better corporation" they're still a monolithic corporation, with all of the problems that that entails. Others might switch to Dungeon World, 13th Age, or Shadow of the Demon Lord - but again, you are leaving your gaming in the hands of designers who don't know you or your players, and hoping that their vision will more or less suit you.
You don't have to settle for "more-or-less". My favorite tabletop roleplaying game - the GLOG - isn't even a game, it's a toolkit for you to make the exact game you need and a community of DMs, GMs, and game designers who will help you do it. That's what this post is about.
Posted by vayra at 9:38 PM 7 comments: