Canyon is a duet game about resource management and unexpected solutions, set in a largely undescribed post-apocalypse. I haven't gotten to test it yet, but I'd like to.

It's really good. I played a test run. It wasn't supposed to be a solo RPG, but the way the ghoul acts seemed so perfect for scripting that I couldn't help but think of it as one.

A handful of discord messages, a hastily googled public domain stock photo, and an hour and a half in photoshop later, I turned it into a one-page solo game: 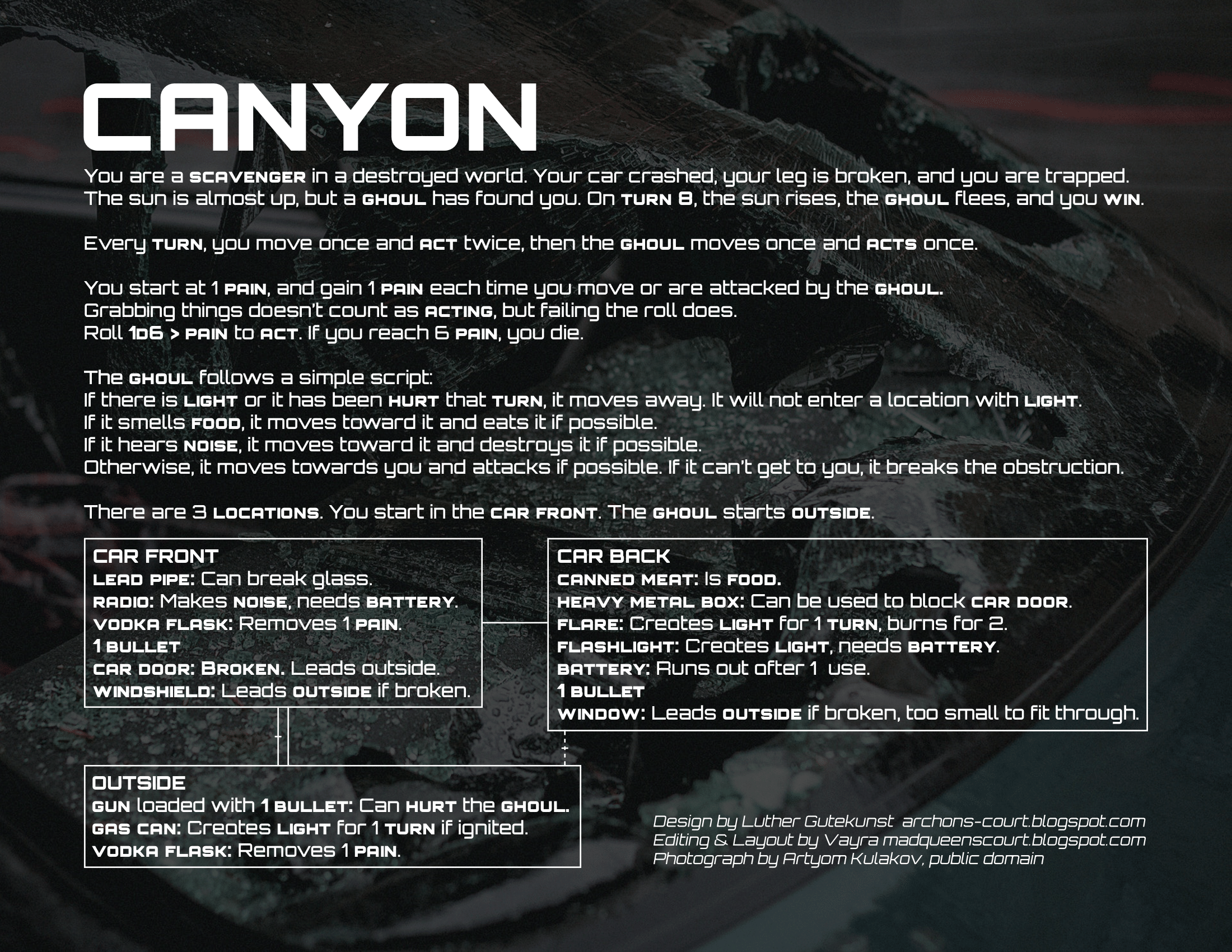 Click for big, or here for PDF.
Like all solo RPGs, this one probably requires a little bit of interpretation on the part of the player/GM - but not much.
In case it helps, here are two playtest reports with very slight differences in interpretation. Both are correct:
Posted by vayra at 3:07 PM No comments:

Let Me Tell You About My D&D Character(s)

DandyMan over at Throne of Salt posted a whole bunch of their old characters and it got me thinking I should do that. I don't have the character sheets, but I'll see if I can assemble an approximate timeline of my life in TTRPG characters regardless!

I fully expect nobody will read this, as it is both deeply personal and by far the longest post on my blog to date (not counting the Mountain PHB I guess, if you include linked documents). Ah well, it was a fun trip down memory lane.

I started playing D&D with the red box, which my parents bought for me at a garage sale or thrift store when I was in elementary school and about 7 years old. I played one or two abortive games with the example dungeon in the box. I don't even remember who DM'd - it might have been me! I do remember the party being TPK'd by the fucking Carrion Crawler, however. And that the teacher I had roped into playing with me rolled a Magic-User with 1 HP.
I did not play red box again. Which is too bad, because it managed to teach a 7-year-old me what D&D was and more or less how to play it - albeit with the help of an older student and a teacher who had both also never played before. That's pretty incredible!

Middle school! One of my friends knew what D&D was, and he ran a game that was certainly not D&D, played with our imaginations and absolutely no dice, books, pencils, or paper. I remember it cribbing heavily from Warcraft 3 and a little bit from like, Legacy of Kain: Soul Reaver, which I had forgotten the name of and my (genius) partner somehow managed to identify from the extremely flawed description I gave them while writing this: "what was the like, PS2 or PS2-era PC game with the vampire guy who was ugly and had a big scarf over his face? I don't think it was Devil May Cry but it might have played like it... I wanna say "soul eater" but apparently that's an anime fighting game"
We did not ever play a tabletop game with rules.

High school! 3.5e was out, I was old enough and nerdy enough to understand it, and there were people who played nearly every day! None of our games played at school lasted very long, but I did play in one fairly successful campaign run outside of school, near the end.
I know this is a bit of a heretical opinion among OSR grogs, but 3.5e remains my favorite version of D&D to this day.

When I was 16 I dropped out of high school, got a job, and moved in with my girlfriend at the time. She ran a very long campaign with several of our mutual friends, which is to date the only long-term D&D campaign I've played in that actually managed to reach a conclusion. I've run games (both D&D and not) that reached a suitably climactic endpoint, and I've played in non-D&D games that did, but this remains the only D&D game I was a player in which achieved that.
Unfortunately, Vox died (I think he leap attacked right off of the deck of an airship, it was a glorious death) around level 6 or 7, and I had to make a new character.
I feel kinda bad about that now, but damn was it ever fun at the time.

There followed quite a long time (six years? ish?) where I didn't play in any games, though I did run several games of a post-apocalyptic d20hack that I should really type up for the blog some day, but here's a link to the generators I used to stock it for the time being. One of the most positive outcomes of this was that in doing so I introduced a friend to the wonders of TTRPGs, and he later went on to run several cyberpunk and time-traveling weirdo games using the same system. The latter three characters below were for his games, the first one was for a Roll20 campaign of FFG Star Wars that I played with some pals from leftbook.

Now we get to the characters I'm either currently playing, or was playing in games within this year:

What have I learned by typing this?
Posted by vayra at 4:28 PM 5 comments:

Since my last post there have been like, at least four more batches of GLOG microclasses.
The posts relevant to this that are known to me are collected here:
Because I am a slave to the zeitgeist, I compiled all of them into a single generator.
Be warned, it is much less coherent than the last one. I may prune it a bit later - it was actually doing great until I added the last batch.
It still makes pretty good horror-scenario villains sometimes, though.
You can find it here.
Posted by vayra at 1:30 AM 2 comments: