Perhaps a month of posts was too ambitious. Ah, well, nevertheless: GLOG is about breaking the rules, and thus I shall finish GLOGtober as though it never ended.

The Civilized Lands, from whence adventurers come to the Mountain, are dominated by two large culture-groups, each formed from several component polities. They are the River Kingdoms, an imperial federation that originated in the homelands of the orcs, and the Charter Nations, a more loosely organized alliance and trade group that originated in the homelands of the goblinoids. Today, we are concerned with the former. 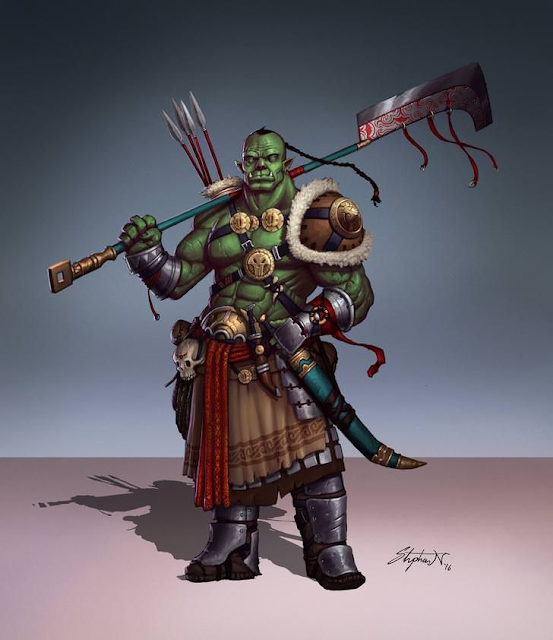 The Mountain Player's Handbook has this to say about orcs:

2. Orc: Tall and universally muscular, with strong brows, jutting lower jaws with protruding tusks, and pointed ears. There are three races of orc: Hill, water, and “half”—the lattermost of which would more properly be termed “mountain orcs”.

3. Half-orc: Pale yellow, green, or gray skin, about six and a half feet tall. “Half-orc” is a (derogatory) misnomer applied due to relative size, +1 to a stat of your choice.

Orc social systems and biology are closer to our own than those of goblinoids, so I don't think I need to spend as many words on them. Hill orcs are the ones you probably think of first when you think 'orc' - big, green, etc. This is by design, of course - the imperial dynasty is of hill orcish origin, and by tradition members of the Imperial Court are selected from among the population of the majority-hill-orcish provinces at the empire's heart. 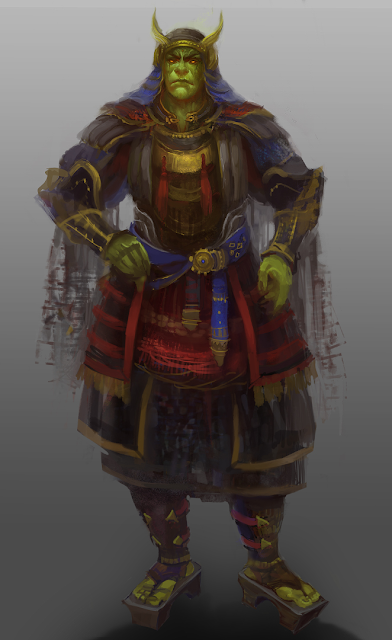 The River Kingdoms are a federated empire of provinces (with governors appointed directly by the empress) and vassal and tributary states (under suzerainty of the Imperial Court). They are innumerable and ever-changing in size and import, but we can talk about the Imperial Core itself as a group as well as the four vassal states most currently relevant.
The Imperial Core
The eight largest and most powerful provinces at the heart of the empire, the wellspring from which its might and glory spread throughout the civilized lands in ages past. The Imperial Core covers such an enormous amount of land that it is difficult to characterize its climate or geography; it ranges from temperate plains, forest, mountain, and steppe in the north to subtropical jungle and coastline in the south. Majority hill orc.

Mondal
A large archipelago kingdom, tropical and subtropical in climate with some mountainous regions temperate by way of altitude. One of the most important vassals of the Imperial Court for much of its history, providing a great portion of its food and art imports and respected as such in the Imperial Core. Majority water orc.

Ked
A smaller vassal kingdom and buffer state between the Imperial Core and its neighboring powers, located along a coastline and stretching inward along several major river tributaries. Ked provides a greater proportion of its population to the imperial army than any other River Kingdom, and several of its people hold high generalships. Majority water orc.

Yema
An empire in its own right, laying claim to a storied history nearly as long and rich as that of the River Kingdoms as a whole. An island nation far removed from the Imperial Core, it occupies a special place in the complex diplomatic structure of the empire as a nominal ally rather than vassal or tributary. Majority mountain or "half"-orc.

Sybia
A recently-acquired imperial possession - a state of affairs which few expect to last, as the mountainous region is a historical enemy of the River Kingdoms and has been subjugated before only to re-achieve independence in a long and bloody cycle of warfare and revolution. Majority hill orc.