What Noble Darkness At The Heart Of Man (Campaign Setting, Races, G_ds) 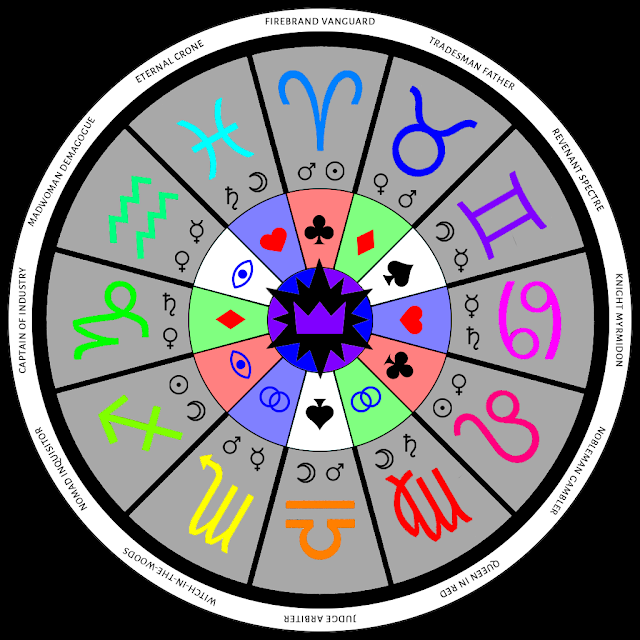 The Titans built the world by playing cards with a 78-piece deck. When their game was finished, they scattered them in the deep places of the earth and left.

From the cards left on the surface sprang the people we know:

Arcadians
The civilized folk of the lush heartland, bronze-skinned and compact. Their suit is diamonds and their metal gold. If you're an Arcadian then you can identify swords and other magical artefacts at a glance, and if your CHA is at least +1 then you can speak and read all human languages.

Yemics
The educated folk of the southeast oases, grey-skinned and sharp-featured. Their suit is clubs and their metal lead. If you're a Yemic then you can fight like a caged animal to make an extra melee attack at the cost of 1 HP, and if your CHA is at least +1 then you can subsist indefinitely on strong tea and tobacco.

Barbarians
The savage folk of the northern tundra, ice-eyed and sturdy. Their suit is spades and their metal iron. If you're a barbarian then you have +1 to-hit, and if your CHA is at least +1 then you're immune to weather.

Monkeys
The arboreal folk of the southwest jungle, naked and hirsute. Their suit is hearts and their metal copper. If you're a monkey then you can hold things in your feet, do handstands, climb and jump real well and do all the other things a monkey is good at, and if your CHA is at least +1 then you know sign language—which will come in handy, because you can't vocalize in human tongues.

Snake People
The inscrutable folk of the southern wetlands, green-skinned and hairless. Their suit is eyes and their metal mercury. If you're a snake person then you are immune to poison, and if your CHA is at least +1 you can speak and understand the language of scaled things.

Horse People
The nomadic folk of the northeast steppes, ruddy and lithe. Their suit is rings and their metal silver. If you're a horse person then you ignore range penalties to-hit, and if your CHA is at least +1 then dumb animals will treat you, personally, as a friend.

Rock People who became Dwarfs
The industrialized people of the mountains, originally from the northwest where there is now only ash, who have excised a part of themselves and become something less than human. They have no suit, and their metal is uranium which is also called adamant. I don't think you can be a dwarf.

Nobody knows from whence came the Elfs (powerful, individual, capricious) and the Leeches (rain-slick, blind, hungry). 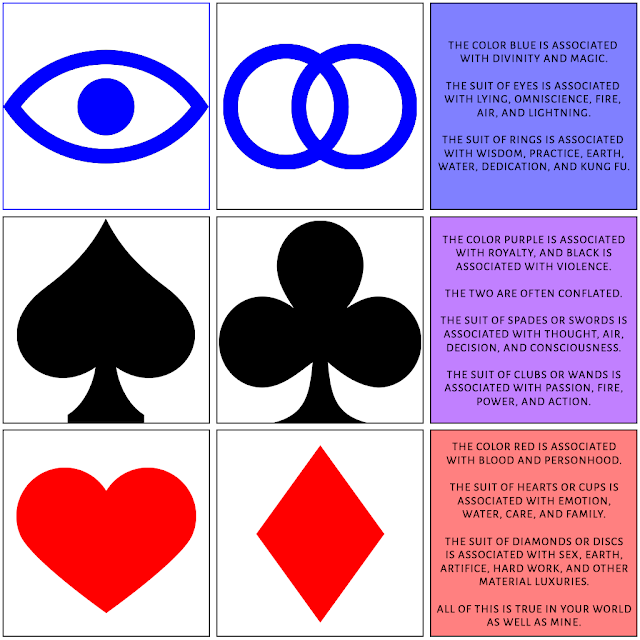 From the aces, each placed on a mountaintop, were born the sacred metals of earth:
Lead
The basest metal, inert and dead. Lead attracts and consumes magic, and can be used as a spiritual protectant or insulator. It is dull and heavy, a dark mirror of its brother Gold, and has few adherents but the dead. Those few it counts among the living wear blue, are expected to hunt Wizards, and wander.

Copper
The dog of metals, the mother of Iron. Copper is helpful and easy to work. Pragmatic and simple and beautiful in her way, she is man's best friend. Her adherents wear red and green, are expected to feed the hungry and shelter the poor, and are common in all territories of Man and Monkey.

Iron
A grim substance, Iron severs the souls of those he contacts. He is a hateful thing, and means destruction, and those slain by him rise as undead when exposed to moonlight. His adherents wear ash-grey, are expected to destroy icons and proselytize, and are common in the land of Yem.
Silver
The touch of Silver burns away curses, disease, and other maladies, and is a toxin to the undead and other monsters. She is known as the holiest of metals. Her adherents wear black, are expected to tend the dying and judge the guilty, and wander.
Mercury
Bold and capricious, Quicksilver is liquid at ambient pressure and temperature, and toxic to Monkeys and most species of Man. Their adherents—among the Snake People and Elfs who can safely handle them—wear white, and are expected to use drugs and meditation to achieve higher states of being.
Gold
The lord of metals, Gold is most prized and studied among his kind. He is intimately connected to royalty, and accumulates spiritual weight when exposed to blood or violence. When possessed, he attaches to the soul of his bearer and adds his weight to theirs. His adherents wear purple, are expected to accumulate power at any cost, and can be found anywhere there is something to gain. 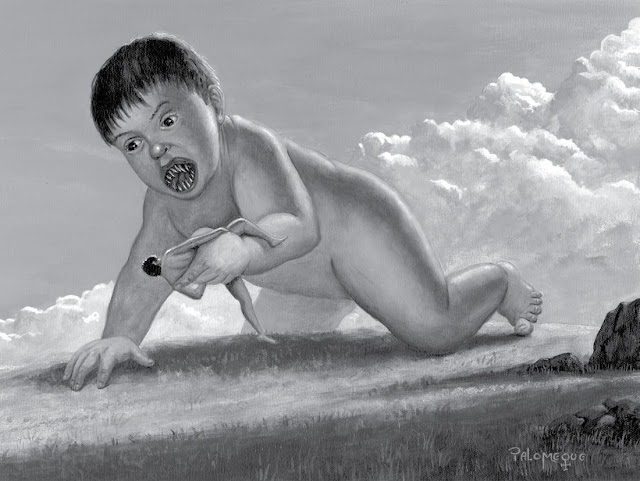 Legend holds that the First King Prometheus unearthed the King of Eyes from its hiding place deep beneath the earth in ages long since past, thus bringing the curse of Kings upon Mankind. Legend also holds that he was devoured by his knights for this crime, and his bones interred in the distant northwest before it became a land of ash and folly.

As for the truth, well, perhaps there's a hole you can die in attempting to figure it out.