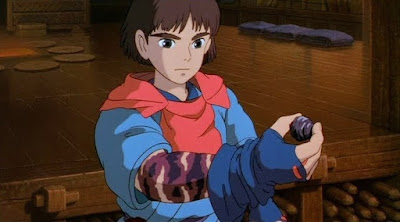 I watched Princess Mononoke last night and I'm procrastinating editing the spell list for my 'PHB' so here's the main character guy and a bunch of mechanics about sacrificing max HP forever to negate encounters. This guy will probably fuck up your campaign but might be an interesting gamble in "how long can I adventure for before the curse consumes me".

If your system has variable HD and/or proficiencies, you have them like a Fighter without shields and only light armor.

When you encounter a spirit of any kind, you can roll Wisdom to intuit what it needs or wants, even if you wouldn't normally be able to communicate with it.

A: Red Elk
You have a Red Elk companion, sort of like a giant lechwe or antelope. It has stats like a light warhorse but is smarter, more loyal, and considerably more agile on broken or rocky ground. It's also preternaturally lucky, and will never be intentionally killed in cold blood by an enemy (though it can still be attacked). If you lose it anyway, you suffer incalculable emotional trauma.

A: Fight Like A Demon
You carry a curse in your right arm. When you let it loose, you destroy people - more than simply kill them, you separate heads and limbs from bodies with your blows; but each time you do this brings you closer to your death. When you make an attack, you can choose to spend one point of your maximum HP. If you do, the attack automatically hits. Against most opponents, it also automatically kills them (at the GMs discretion, they might instead have it simply deal double maximum damage). If the attack kills its target, they're cleanly dismembered; your blow severs both arms neatly at the elbow, or your arrow punches through their neck and carries their head away with it, etc. Maximum HP spent on this ability can never be regained.

When you die, you will be reborn as a demon in the form of a writhing mass of worms that retains your approximate shape.

B: Clash
While you're armed, once per round you can give up an attack to negate the next melee attack made against you before the beginning of your next turn. If you also spend a point of maximum HP, their weapon is destroyed unless it's a magical or natural weapon. Maximum HP spent on this ability can never be regained.

B: Talkdown
As long as you personally have caused no damage so far, opponents in combat will always hear you out if you attempt to talk them down. They won't necessarily stop fighting you or your allies while you negotiate, of course.

C: Stunning Blow
When you hit with an unarmed attack, in place of dealing damage you can have your target roll Constitution (or Strength or a Fortitude Save or whatever your system has) or fall unconscious for a number of minutes equal to the number of Blackhand Warrior templates you have. This ability only works if the target doesn't know you possess it, otherwise they'll be on guard against the technique - i.e. you can use it only once per set of opponents and if they pass their roll you can't try again.

D: Ignore Death
You can take an musket ball to the chest and keep walking. Once per day when an attack would reduce you to 0 or lower HP, you can choose to instead spend any amount of your maximum HP and prevent 10 damage from the attack for each point spent. Maximum HP spent on this ability can never be regained.
Posted by vayra at 3:06 PM