I want to talk about lance charges. 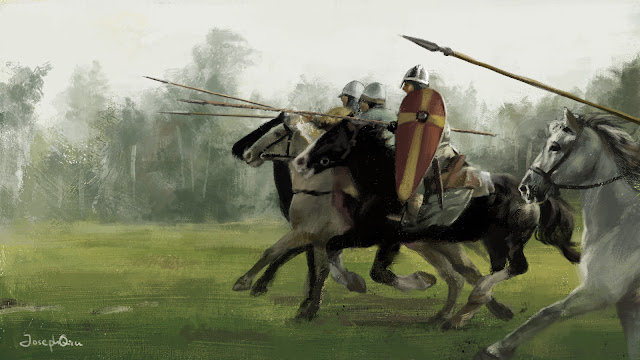 Vaguely medieval lance charge.
In the three point fifth edition of the World's Most Popular Role-Playing Game, that being the one I grew up playing, a level 3ish fighter with a lance and a horse can do about 48 to 207—48 to 69 without a critical hit, nice #nice (nice)—damage with a lance charge if you're pretty strong and know what you're doing, for example if you built your character to be Central European Minor Land-Holding Warrior Nobility Orc Cavalry Mulan. In a system where stuff of that level (including you) has 20ish HP, give or take.

What I'm trying to say is, I've always felt like this is something that is missing from old-school play. I grew up with a very specific sort of mechanical fantasy simulation where lance charges essentially vaporize people, dragons, ogres, castle walls, &c, and most systems I've played since then don't deliver that.

This is, obviously, a flaw to be corrected. 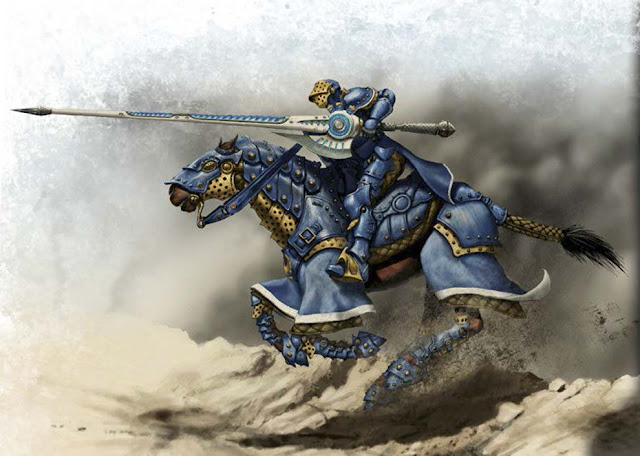 Very Fantasy lance charge, of the type which we are discussing.

You are a member of the Broadly Fantastical European Minor Land-Holding Warrior Nobility. You have been trained since birth in Athletics and Warfare and fed on a diet of blood and milk; but more importantly you are huge, and you will become even huger, and the hoofbeats of your steed shall echo both forward and back into myth and history, and you know how to fight.

Every template of Knight you have gives you +1 to-hit and +2 HP.

Skills: Athletics, Etiquette, and one of 1. Warfare 2. Heraldry 3. Stewardship

If you want a list of special horses instead, there is a good one here.

A: Knight's Charge
When you charge at least 10' and attack, you get an additional +[templates] to-hit and damage and damage you deal is further multiplied by 1 plus the number of the following which are true up to a maximum of 1 plus [templates]:

A: Mounted Combat
When damage is dealt to you or your mount, you may split the damage received between it and yourself in any arrangement.

B: Ride-By Attack
When you strike something with your Knight's Charge, you don't have to stop. You can keep going up to you (or your mount's) full movement, and probably turn around to do it again next turn.

C: Split Lance
By shattering your lance as a part of a Knight's Charge, you may reroll your attack roll against adjacent targets in order to distribute attack damage in excess of your original target's HP among them. I envision this as an explosion caused in much the same way a gas-piston combusts fuel by compressing it but you can interpret it however you like.

D: Pierce The Heavens
Your Knight's Charge trails swirling rainbow vortices, becoming charged with BATTLEFIRE and dealing damage to any target (including g_ds and spells) as if it were the most advantageous material or element applicable.
Whenever you would be able to achieve a x5 multiplier with your Knight's Charge, you (and your mount) may charge in any direction you can currently perceive in order to deliver it.
Targets reduced to 0 or fewer HP by your Knight's Charge disintegrate utterly, beyond the ability of any mortal magic to resurrect or make whole. 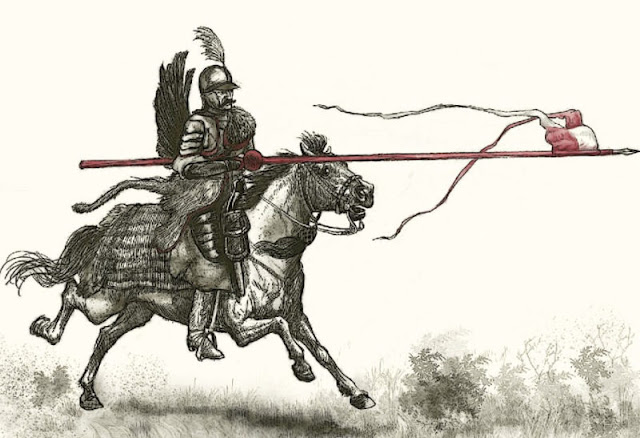 Why Is This Interesting?

I think it's an extension of the theory of a "Fighter as the member of an expeditionary force of specialists, who specializes in Fighting as opposed to Medicine or Dinosaur Psychology". This class is a hyperspecialized version of that idea; a Fighter who is not only capable of Fighting anything they meet, but probably trivializing it, as long as they have their horse with them, and enough room to wield a lance, and at least 20' to maneuver (have to charge at least 10', and the lance is 10' long). They have some ability if not all those things are true, but ultimately what it comes down to is that if your DM lets you line up on someone with your mount, your lance, and 20 clear feet between you they know exactly what they're doing and it oughtn't be that disruptive for you to vaporize them with your lance.
Properly, I suppose that means that their party should be comprised of other hyperspecialist classes. Dinosaur Psychologist indeed. I guess that was what 3.5e did, in the end, with the miles of supplemental books and the involved character builds - though most of it was, as this is, focused around combat. Very specifically, very specific ways to win fights. Hmm.

The Knight-as-Superweapon is a very powerful tool (lance charges) with very specific applications (trolls, drawbridges, fortress walls, other knights, dragons, et cetera). I think it's, paradoxically, probably most interesting in a game where you don't fight all that much.

Another thing I like about it is that it's not reliant on a magic horse or magic lances. Your horse is a real horse, with all the attendant not-wanting-to-go-in-a-dungeon-or-being-able-to-climb-ladders that that entails, and your lances shatter. You need to bring horses and lances around. That's cool, to me.

I also think it implies something very funny about the setting. This is a world that will never invent the tank, probably, because why would you when a guy can sneak up on it with twelve feet of wood and a quick little horse and lance charge it into next Tuesday. Knights-as-Superweapons indeed.

S'also a power fantasy, of course. I dunno, I think that's kind of fun. 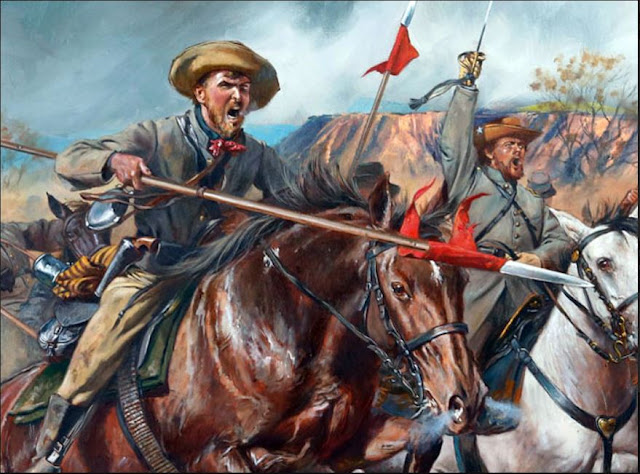 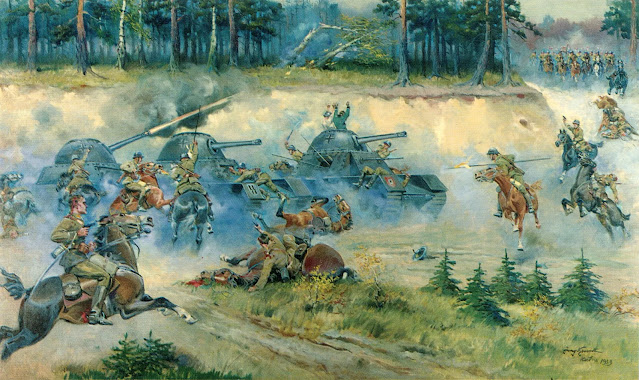 I know not with what weapons World War II was fought, but World War III will be fought with lance and steed. Lance charge in the 41st millenium, in the grim darkness of which there is only war. 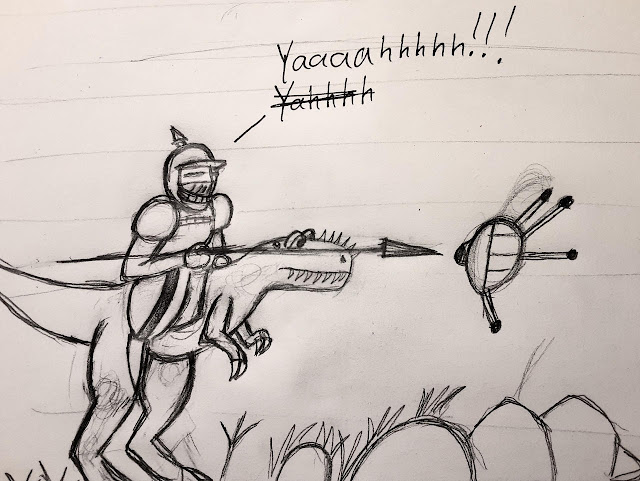 lance charge. lance charge. lance charge. lance charge is the fastest, it is faster than anything. it is faster than light, it is more than we can comprehend. it is a beam of pure thought directed from my shoulder into your solar plexus at a billion miles a second.
i lance charged someone today and when the smoke cleared we were both 10 years younger. he tried to feint me but before his brain could even send the impulse to the nerves in his body telling him to point over my shoulder, i had lance charged him twice. sometimes i do it so quickly i don't even know it happened, i am just instantly surrounded by mountains of bodies, shields splintered and chests crushed like old fruit.
i have tested this, i have tested it in my cum fort. it is hopeless. i send this message from the distant future, lance charges have trapped me in the time and space i do not recognize. send help. lance charge a trauma kit and it may end up near my epoch.
Posted by vayra at 9:36 PM