Bestiary: A is for Angel

An effort to force myself to finish the Bestiary for the Mountain at the End of the World. Stats are for the GROG, so base AC is 0 ascending and base attack is 10 + level ascending.

Angels are spirits of sun and fire. Most angels are comprised of two parts; the divine soul—a fire elemental—and the celestial body, often an armature or suit of blessed armor but sometimes a device of more sophisticated and less explicable holiness.

No form of angel is ever damaged by fire, either consecrated or natural. 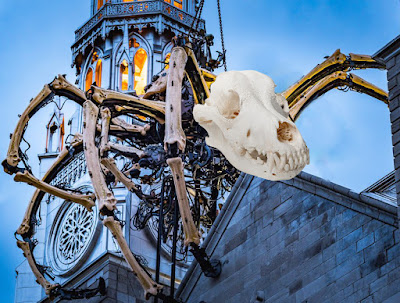 pretend it's a toy cathedral or something

Dogs are sometimes held to be angels, but not all dogs and especially not all dogmen are close to and of the sun. Dogs-spider are not true angels either, born in crypts as others of their specii, but grown fat on the flesh of the holy dead. They consume all of their benevolence and wisdom and take some measure of it into themselves, leaving the corpse-saints ragged and malicious in their tombs.

Dogs-spider have furnaces for hearts and smoke for blood and they need coal or bone or ash or oil or soot or corpseflesh to stoke their flames. They have the voice of a screaming choir emitted in short, sharp barks, and four long, multiply-jointed legs that terminate in iron spikes. Their canine faces (not masks, no) are carved from ivory and sanctified bone, and if pulled off reveal their brains like a thousand knotted worms all alight with holy fire.

Dog-spider bites are not venomous, but their drool can heal physical traumas if smeared across the wound or bruise (heals 1d6 damage, loses potency when the dog-spider dies). They can extrude silk, stronger than any rope and imbued with divine power, but the method by which they do so is extremely gross.

Dogs-spider want to heal the sick, protect the downtrodden, and teach the inquisitive, but also want to chase sticks and burn things and eat and shit and roll around in the ashes. 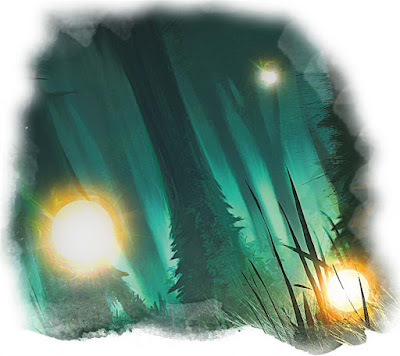 which orbs of light are good and which ones are bad? who knows

Lanterns archon are commonly confused with torches sprite and share many traits, but where a torch sprite is created from a once-living soul, a lantern archon is a true angelic being (albeit the least among them). They are generally helpful, if you can communicate with them. If you somehow acquire a guardian angel, it's probably one of these.

Body of Light: Lanterns archon take no physical damage from weapons. They can be extinguished by anything that would extinguish a brazier-sized fire; a bucket of water or sand, a fireproof blanket, et cetera. 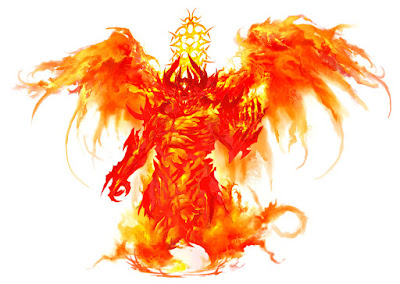 they don't have to be this impressive

I'm not writing stats for these just use something else but it's made out of fire now
Wisdom 16 +3 minimum
Speaks Angelfire, plus Common, Ember, and Old Tongue if it's older

Fires elemental are the core truth of an angel, the same way that a person would have a soul. They manifest physically as a mass of fire or force, which can be of any form as they will.

Smaller and younger fires elemental often manifest in humanoid or doglike shapes, and move with the speed of flame racing up a strip of paper. Bigger and older ones shift through strange and indescribable forms that scratch at half-buried ancestral memories, shades of great adversaries past. They move ponderously, but strike with the force of an explosion.

Fire Magic: Fires elemental can cast one or more of burning hands, fireball, firebolt and/or wall of fire as a white mage of the same level. Bigger and older fire elementals can cast more spells. 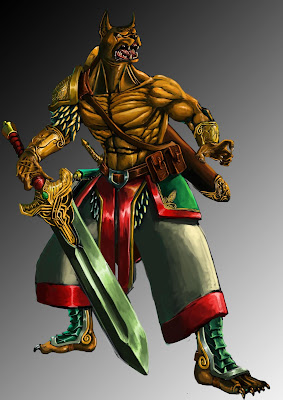 Hounds archon are one of the lesser creations of the angels, born when they need soldiers. They are formed from the skin of a dogman stretched over an armature of brass and iron, packed with coals, and animated by a lesser fire elemental or lantern archon.

Hounds archon are armed with iron greatswords and frequently wear armor to supplement their natural resistance to blows. A hound archon in half-plate has AC 12 and Speed 20'.

Metal Bones: Hounds archon have +2 AC on account of their metal skeleton. 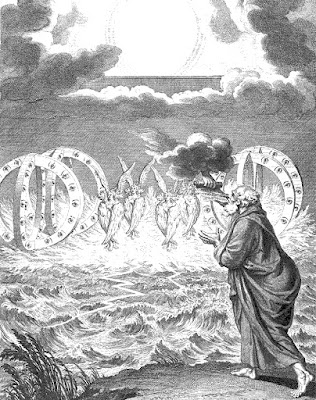 this picture is for both kinds of real angels

Arnold already did this really well so just use his
Speaks Angelfire, Common, Ember, Old Tongue

Ophanim, also known as Wheels, Chariots, or Thrones, are a lower form of “true” angel. Manifested as a whirling collection of between one and six eye-studded golden wheels wreathed in holy fire; ghostly wings of light might be visible in and around the angel’s body. Ophanim are tasked with judging mortal souls, and they tend to be single-minded in this goal.

Seraphim are at the highest level in the angelic hierarchy, the trusted hands of the sun. Each is unique, granted its own set of powers and trusted with a certain domain of the sun’s concerns to look after. Most Seraphim, at least those which mortal eyes can bear to look upon, have the appearance of a confluence of wings, arms, hands, and eyes. They also sometimes appear as towering six-winged humanoid figures with golden skin.

Divine Innocence: Any creature that can see the Seraph and attempts to attack it must roll Wisdom to do so. This ability only functions while the Seraph is at full HP.

Divine Power: Seraphim can cast spells as a white mage of the same level. Their MD are never expended.