Goblins of the Civilized Lands

The GLOGtober prompt todaytwo days ago iswas 'Goblins'. Lets knock that one out before I continue.

The Civilized Lands, from whence adventurers come to the Mountain, are dominated by two large culture-groups, each formed from several component polities. They are the River Kingdoms, an imperial federation that originated in the homelands of the orcs, and the Charter Nations, a more loosely organized alliance and trade group that originated in the homelands of the goblinoids. Today, we are concerned with the latter. 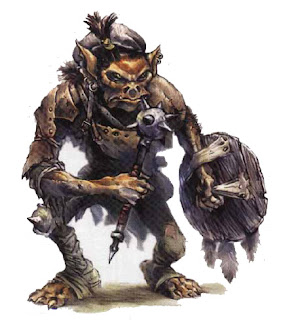 The Mountain Player's Handbook has this to say about goblinoids:

1. Goblinoid: Bright red or yellow eyes with slit pupils, catlike noses, small pointed teeth, bushy sideburns (across all three sexes), and dull orange, yellow, or green skin covered with fine, short, downy fur. Goblinoid society holds that the place of men and women is at home, so most (but not all) goblinoid adventurers are neuters.

Remember, I was an E6 3.5e gal first, so that's what my goblinoids look like. Fine, downy fur, big sideburns, and little wet cat noses.

They're born in litters, about ten at a time, usually one or two of each binary sex and the rest neuter. Bugbears are a genetic anomaly which are born among litters of any other sort of goblinoid, and appear normal as infants but grow to their full size rapidly. Goblinoid natural philosophers theorize that these traits existed to enable their survival of some great hardship in their shared prehistory, and Charter Nation societies tend to have fairly strict gender roles as a result; expecting goblinoid men and women to be parents and homemakers while more physically hazardous roles such as mining, millwork, and military service are filled by neuters. As a result of this, of course, more adventurously-minded male and female goblinoids are likely to be encountered in regions outside of the Charter Nations themselves. 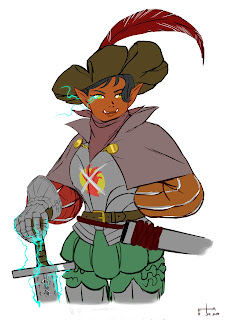 A hobgoblin FIGHTMASTER, or perhaps a BATTLEMAGE

There are six on the Charter Court, with innumerable petty nations, city-states, and feudal holdings between them.
Durras
Forest, tundra, and steppe; geographically massive, sparsely populated, and rich in natural resources. A feudal empire, stagnant in neither ascent nor decline. Durrans are reputed as cold to those they don't know and generous and loyal to those they trust. Majority goblin.
Escautia
Rolling hills and inclement weather; spread between the continental coast and a few small islands. A kingdom, technically, or between one and three depending on who you ask. Escautians are reputed as superstitious, worldly, and crude in manner. Majority hobgoblin.
Eturica
Sharp mountain ridges, open plains, plenty of coastline. An ancient and rich empire in decline. Eturicans are reputed as greedy, debauched, and detail-oriented. Majority hobgoblin.
Kolvenia
An archipelago of rocky cliffs and plateaus; warm year-round except at high altitudes. A federated commonwealth of city-states. Kolvenians are reputed as prone to vice, sloth, science, and romance. Majority goblin.
Ostmarch-Montague
Forest, field, and river; large but land-locked. Two kingdoms merged into one through marriage, an uneasy union. Ostmarchers and Montaguans are reputed as excellent brewers, gourmands, and stubborn perfectionists. Majority goblin.
Pyrenica
Flat plains ascending to rugged hills; sunny and warm. An ascendant empire, struggling with the tensions of industrialization. Pyrenicans are reputed as arrogant, prideful, and musically and culinarily talented. Majority hobgoblin.
It should go without saying that most of these 'reputations' originate outside of the nations mentioned and very possibly none are true. Goblinoids are a diverse bunch.
Posted by vayra at 2:12 AM